Khensur Rinpoche Lobsang Tenzin, Geshe Wangdak, was born in 1935 in the Kham province in Tibet. At age ten he entered Ba Zingon Monastery. At 18, Rinpoche journeyed to central Tibet and joined the Loseling College at Drepung Monastery near Lhasa, where he studied until 1959. In 1960, after fleeing to India, he resumed his studies at Buxa, where a temporary monastery was established. In 1970, he moved to the newly relocated Drepung Monastic University in Mundgod, South India. After two years of intensive study and practice he moved to Sarnath, studying there until 1977. Rinpoche returned to Drepung to take his Geshe exams, and his scholastic achievement earned him the Geshe Lharampa degree.

Soon after completing his Geshe exams, he was invited to teach at Namgyal Monastery in Dharamsala, India, where he was senior teacher for 14 years, teaching both sutra and tantra. While at Namgyal, Rinpoche received initiations and teachings of tantric practices of all four traditions of Tibetan Buddhism. In 1991, he was appointed Abbot of the monastery by H.H. the Dalai Lama, a position he held until 1994. In 1995, His Holiness appointed Khensur Rinpoche Abbot and Senior Resident Teacher at Namgyal Monastery in Ithaca, NY. He retired from Ithaca in 1998, and now resides at the Chenrezig Tibetan Buddhist Center in Middletown, Connecticut.

Besides his studies in the core curriculum under his tutor at Drepung, Khensur Pema Gyaltsen, Khensur Rinpoche received tantric initiations from H.H. the Dalai Lama and many other teachers.

Jeffrey Allen translates Rinpoche’s teachings at the center and often accompanies Rinpoche in his teachings throughout the United States.

Jeff began studying various traditions of Tibetan Buddhism in 1995, with emphasis on the teachings of HH Dalai Lama XIV. In 1998, Khenshur Geshe Wangdak Rinpoche moved to Middletown where Jeff began studying directly under Rinpoche, while also serving as his attendant. In 2001, Jeff moved to Drepung Loseling Monastic University in South India, where he became a student of Geshe Lobsang Gonpo and learned to debate Buddhist Philosophy as presented in the Five Great Philosophical Texts.

Shrine Room Etiquette
As a place intended for hearing teachings, as well as for prayer and meditation, we ask that the Shrine Room be kept a peaceful space at all times. Please consider the following points of etiquette:

In general, please be respectful to the shrine room, the Lama/Teacher, and those attending the meditation and/or teachings. If you have questions, please ask. We are all here to increase our understanding of Buddhism. 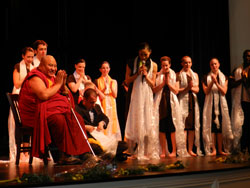 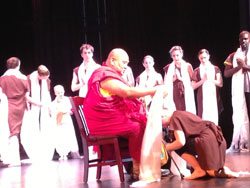 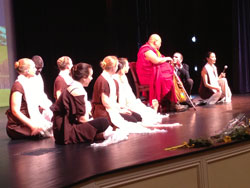